As long as people have built and lived in houses, there have been home architectural styles. With over 150,000 houses, Portland home architecture has a variety of favorites to choose from ranging from classic American ranch to Foursquare homes to Storybook.

What is a Luxurious Home?

It is a tough task to define luxury since it often depends on a person’s perspective. One thing is certain, a luxurious home is designed with high-quality materials and construction in mind. These are not cookie-cutter homes, but rather, houses that are well proportioned and have an architectural style that emits visual elegance both inside and out.

What is an Architectural Style?

An architectural style are the features that make a building identifiable. These features include elements such as materials, construction, or character traits. Architectural style makes a home unique and special while giving form and function. Each architectural style has a history and generates loyal followers. Some people love the openness of modern and contemporary homes while some homeowners are fans of Spanish-influenced styles or Arts and Crafts.

The Colonial style of architecture is possibly one of the most familiar American home styles and even has a Portland neighborhood, Colonial Heights, named after it. Dating back to the 1800s, American architects began adding distinctive designs that added an air of elegance and dignity to these homes. With at least two stories, the front door is positioned to open at the top of the stair as a central focal point, creating a grand entryway. Traditional Colonial styles inspired a variety of other types of Colonials, including German, Spanish, Dutch and French. Portland neighborhoods like Laurelhurst and Portland Heights boast a variety of Colonial style homes. 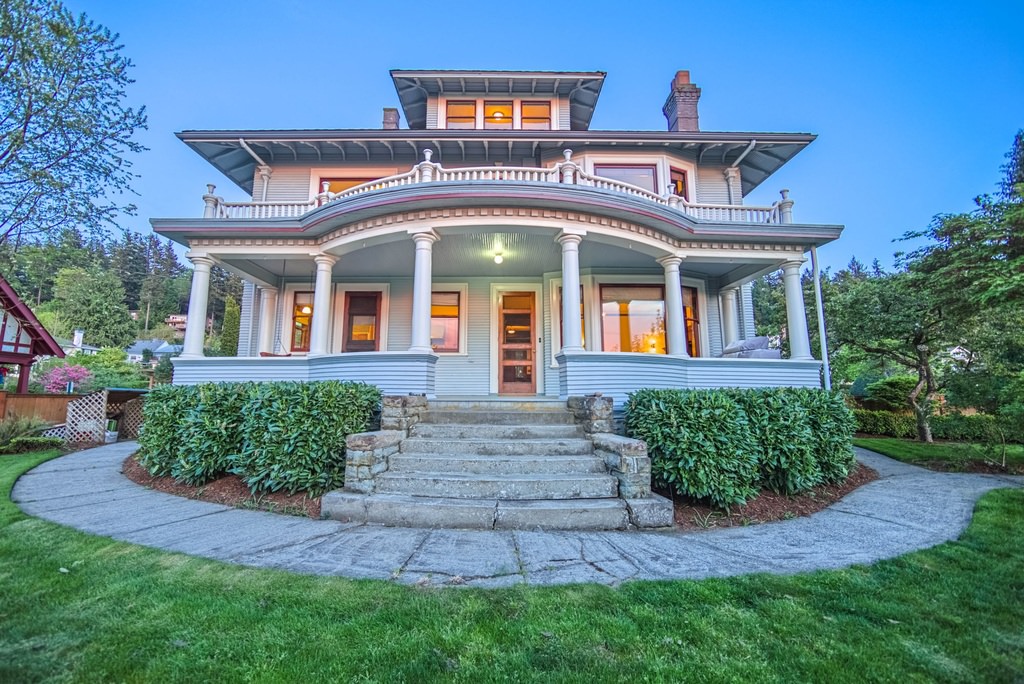 The Foursquare is a classic American style that is found in many older Portland neighborhoods like Brooklyn and Buckman. Their distinct cubic look and wide front porch were popular from the 1800s till the 1930s and was one of the first modern style homes in Portland. This iconic home has a simple understated design that is well suited for luxurious interior remodels that add modern features to make it beautifully liveable.

With simple, uncluttered spaces and smooth, clean lines, modern-style homes are comfortable and inviting. The most popular variation of modern style is mid-century modern, which arose during the 1920s and 30s and is found throughout Portland. Many homeowners are looking to bring more natural light into their home and open up closed-in floor plans, a major part of modern design. A modern revitalization of a home transforms a basic style to a unique space that offers luxury, light and spacious living. With the right architect and builder, a home can create simplistic lines that still offer well-balanced design, creating a stunning modern house.

Ranch-style homes are uniquely American and began popping up around the country, including Portland, in the 1920s. Original ranch-style homes were fairly simple but soon different design elements, like split-level or sunken living rooms, were incorporated. In Portland, the ranch’s simple, one-level living is often designed to bring the outdoors into the home. Large windows and lots of access to outdoor spaces are part of the appeal of Portland ranch architecture. Today, many homeowners are remodeling and modernizing their older Portland ranch homes or building modern custom ranch homes that incorporate the retro feel of the past.

Even though Portland is a long way from the Mediterranean, that doesn’t mean the architectural style isn’t a source of endless inspiration. Exposed beams, arched walkways, open kitchens,  tile accents, and natural stone all have Mediterranean influences. The Mediterranean style’s affinity for natural materials works well in Portland, a region surrounded by natural mountain beauty and influenced homes can be found in neighborhoods like Portland Heights.

European styles blend the architectural elegance of the Old World with more modern conveniences. The Tudor style is one of the more popular European-style homes that came to America. Tudors were built in cities and suburbs all over the United States showing off distinctive exterior components. Steep roofs, stucco, and decorative half-timbering are some of the more recognizable features of European-style homes. Many of these homes were built in Portland pre-World War II with smaller rooms and dark wood. For homeowners who love the look of a European-style home but want something to accommodate their modern lifestyle, partnering with a good architect and builder will be key for high-quality remodel construction.

Victorian-style architecture encompasses a lot of home types that each have distinctive features. Emerging during Queen Victoria’s reign over Great Britain, Victorian styles are known for their colorful facades, steep roofs, round towers, porches, and intricate trimmings. With their dollhouse-like features, these charming homes are found throughout Portland and were built to be looked on and admired. Victorian home remodels will want to stay true to the original while adding period-inspired features that honor the architectural design.

The Arts and Crafts movement flourished in the early 20th century and gave rise to many types of architecture including Craftsman and Bungalow homes. This architecture focused on materials and patterns that were inspired by nature and focused on craftsmanship, quality and good design. Naturally toned woodwork, geometric stained glass, built-ins, wide front porches and exposed beams are part of the Arts and Crafts style tradition. In Portland, Craftsman and Bungalow homes are prevalent in quite a few older neighborhoods, especially on the east side. Many homeowners of these Portland architectural gems are interested in keeping the charm while making updates to fit their lifestyle.

Originating in New England in the late 17th century, Cape Cod-style homes became popular for their practical affordability. Hundreds of Cape Cod-style homes now dot the country, aging gracefully with their simple lines and versatility. Cape Cods are perfect for homeowners that want to have a luxury home that uses space efficiently. With the right high-quality materials, a Cape Cod remodel can be gracious and elegant offering a nostalgic appeal.

With cottage-inspired sloping roofs and quaint curving walls, Storybook homes are whimsical and fun. Storybook architecture is purely American, probably starting as a Hollywood movie film set in 1921. But the design captured imaginations and soon they spread from Los Angeles to the Pacific Northwest. In Portland, Storybook style homes are found in neighborhoods like Alameda-Irvington and are often blended with other styles like Tudor.  The fairy tale design is charming but also is intimate in scale with small windows and an asymmetrical aesthetic that tends to make them darker inside.

At Hamish Murray Construction, we believe that every aspect of your home, from attics to basements, should be all about you. We have building experience across a wide variety of home styles. If you are interested in talking to us about your plans, we’d be happy to help and see if we’re the best builder for you.

As collaborative planners and detailed executors, we work with architects, trade partners, and other construction professionals to keep your project going smoothly, on schedule and on budget. Our talented team takes your vision to build or remodel a home from start to finish, creating a result you will love.

We would love to hear about your project. Contact us or reach us at (503) 460-7203 with any questions you may have and let us help you make your home or remodel dreams come true.

Manage Cookie Consent
To provide the best experiences, we use technologies like cookies to store and/or access device information. Consenting to these technologies will allow us to process data such as browsing behavior or unique IDs on this site. Not consenting or withdrawing consent, may adversely affect certain features and functions.
Manage options Manage services Manage vendors Read more about these purposes
View preferences
{title} {title} {title}